The fall of the Сrypto Titans

As time passes by, the veil of enthusiasm subsides, and the smoke of marketing wars clears, the real technologies of many TOP30 Coinmarketcap titans become less attractive, and developers are leaving the projects en masse. In this article, we will look into why large projects lose their position.

The UCL Blockchain, together with Imperial College London, conducted a study that helped them conclude that most transactions on the EOS, Tezos, and Ripple networks carry no value.

For example, by checking transaction data from October 1, 2019, to April 30, 2020, the analysts found out that most of the EOS and Ripple transactions showed characteristics that resemble DoS attacks. 95% of EOS transactions were initiated by the EIDOS airdrop. 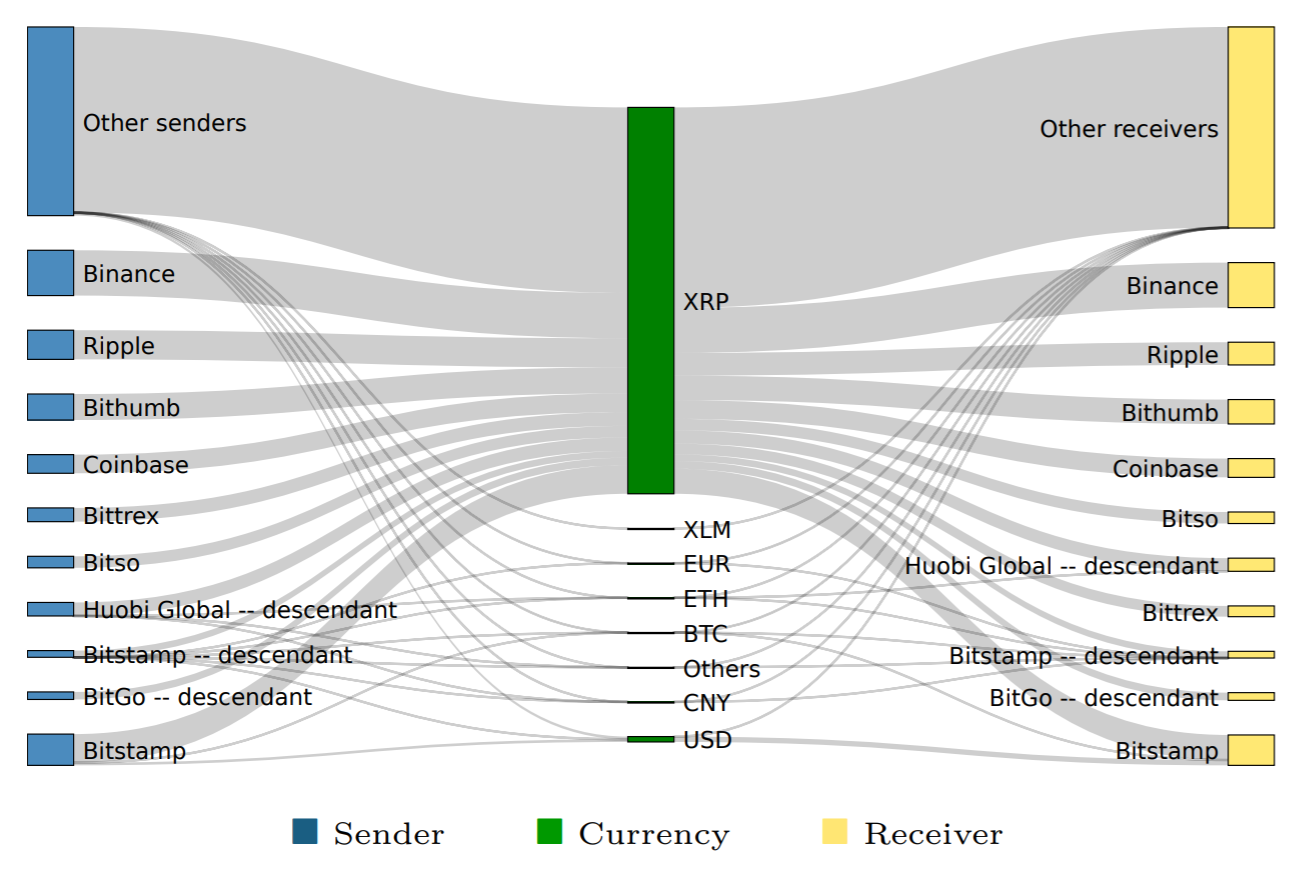 Over 94% of Ripple transactions have no economic value: out of the 90,000 XRP wallets that completed 150 million transactions throughout the period of study, 30,000 accounts only completed one transaction each, while 18 wallets associated with Huobi completed half of all transactions.

For Tezos, since the number of transactions per block is significantly higher than the number of mandatory confirmations (32), most of the bandwidth, namely 76%, is used to maintain consensus.

The conclusion of the study is as follows: all three blockchains demonstrate a high level of bandwidth, but their huge potential is far from being fully realized. In fact, only 0.2% of all transactions were actually meaningful token exchange transactions during the entire observation period. 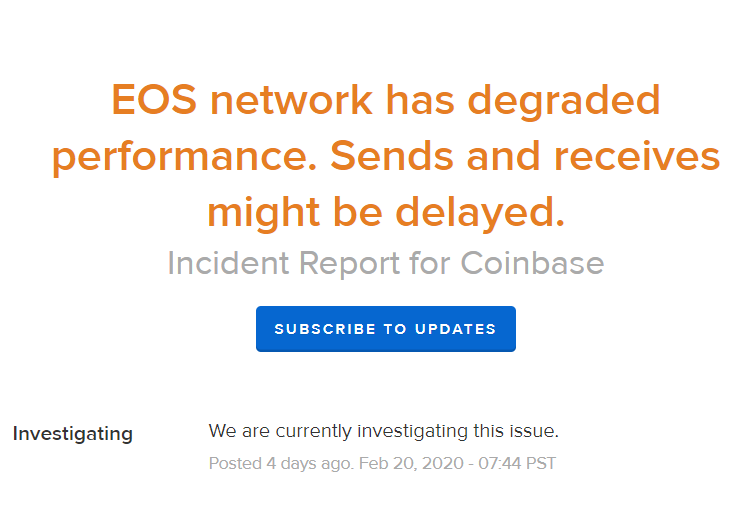 Untrue. The network is operating fine, and Coinbase is shifting blame away from their internal infrastructure problems. No other entity is reporting issues. None of our monitoring shows any issues. They could reach out to any of two dozen knowledgeable block producers for free help, but instead, they do this. Exactly what are the problems they see? They provide absolutely no details.

Although some micro-forks have sprung up on the network on February 20, EOS Mainnet is currently extremely reliable. If you still have problems, do not hesitate to contact us, and we will be happy to help you solve them.

Earlier, in November 2019, Coinbase already faced increased congestion on the EOS network and the problem with processing client transactions. Airdrop of EIDOS tokens significantly contributed to the overload of the network that time. 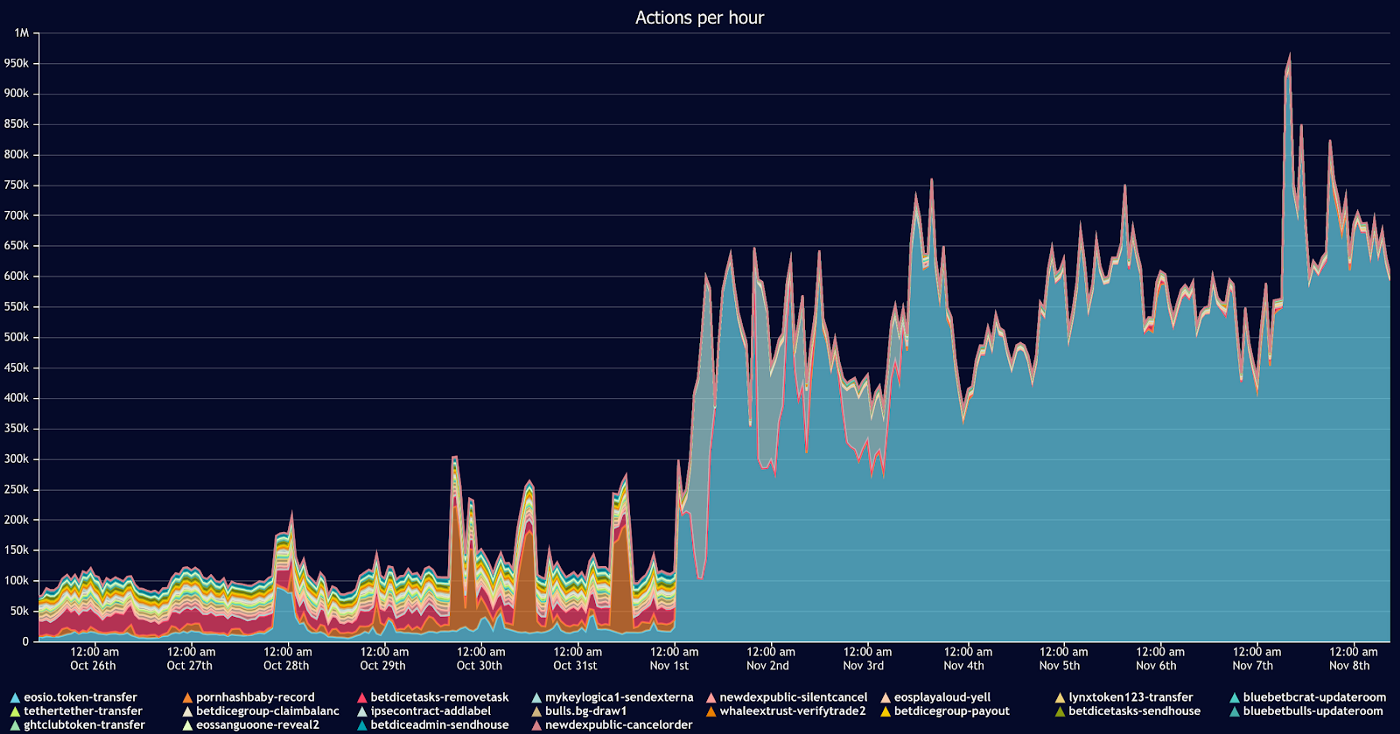 The exodus of the developers

The latest Outlier Ventures study shows that over the past year, numerous developers left well-known blockchain projects. EOS (-86%), Bitcoin Cash (-63%), and TRON (-51%) which lead to a significant decrease in developer activity. 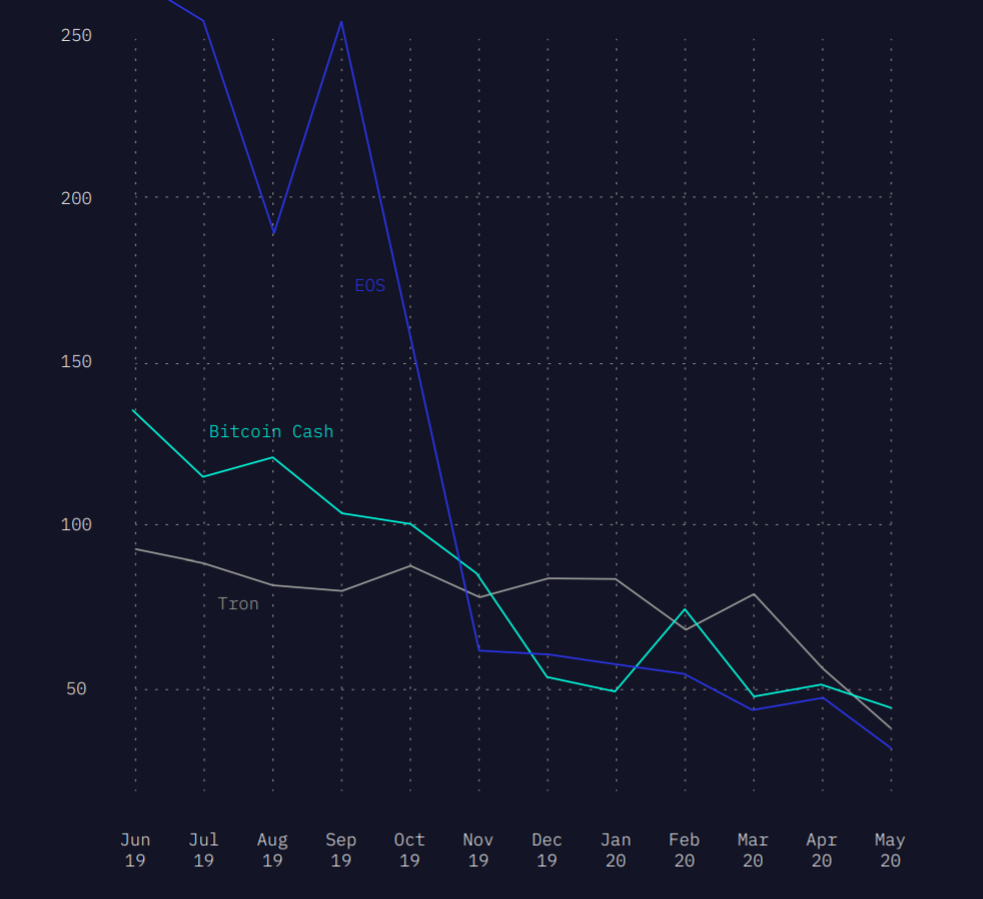 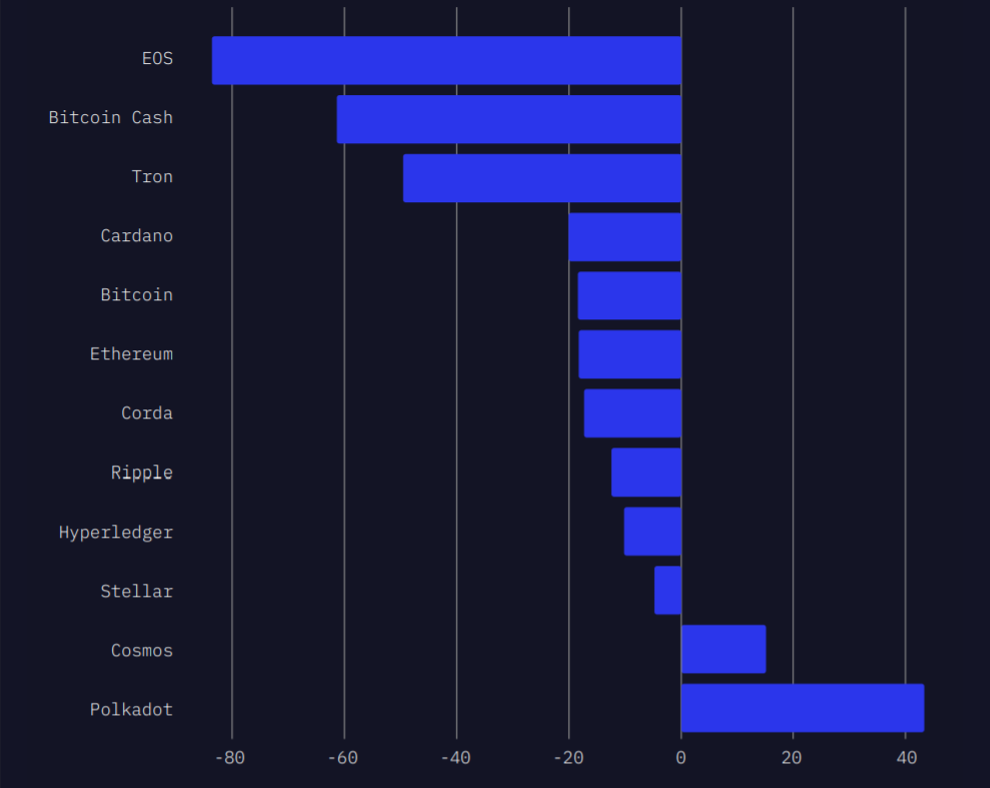 Nevertheless, new players such as Polkadot (+44%) and Cosmos (+15%) show a significant increase in developer activity, although, given their recent major launches, one may not be certain that the growth will continue at the same pace. Theta (+931%) and Cardano (+580%) were the record holders for the number of weekly code updates. Analysts attribute the rapid growth of Theta updates to the combination of the launch of the second main network in late May, the recent price change, and low development activity in mid-2019. The reason for the growing number of Cardano updates is probably a mixture of the upcoming release and the recent price movement. In both cases, such growth is quite unlikely to continue. 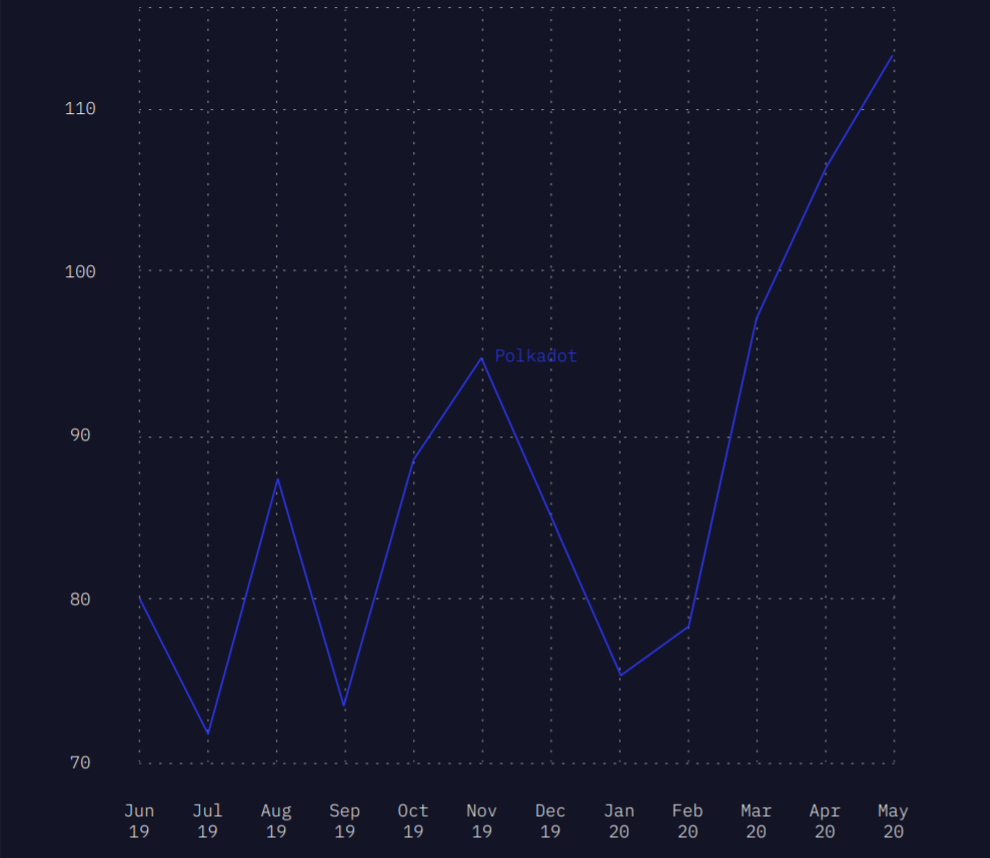 The development of core protocols over the past year throughout the industry has been very unstable. Among the 30 leading companies by market capitalization, project development activities fluctuated approximately equally, which may indicate the migration of developers following more favorable conditions and prospects.

Life at a distance

Everything points at the fact that the halo of technology innovation and the genius of the decentralization model are difficult for large projects to maintain at a distance, which is especially important in such a transparent environment as the blockchain industry. As always, more attractive conditions, bright ideas, and breakthrough technologies are being pushed forward, capturing the crowds of enthusiasts, leaving the former titans resourceless. We, in our turn, are left to watch the battle on Olympus unfold.

A proven leader, successful at establishing operational excellence and building high-performance teams with a sharp focus on value creation and customer success.

The Bitcoin blockchain is rightfully considered the safest and most reliable decentralized system, where integrity is achieved through cryptography. The…

At the dawn of the emergence of cryptocurrencies, mining, investing, and trading were the only sources of income. The…

Alternative consensus algorithms. Should we give up PoW and PoS?

A few weeks ago, we covered the features of the primary consensus algorithms and examples of the blockchain projects that…

The cryptocurrency options market has exploded in popularity and are more heavily traded than futures and swap markets. News about…