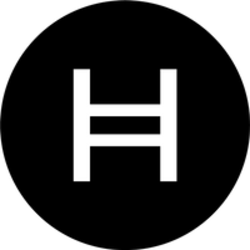 Hedera Coin Price Chart determines the exchange rates between major fiat currencies and cryptocurrencies – including BTC, ETH and XRP to USD, EUR, GBP. Conversion rates are based on Live HBAR Price Index and the price indices of other digital assets.

What Is Hedera (HBAR)?

Hedera Hashgraph is a decentralized network that differs operationally from the Bitcoin and Ethereum blockchain systems but implements similar features. It is based on more effective security and validation algorithms than those employed by blockchain networks. It is intended to be a more equitable and effective system that removes some of the drawbacks of older blockchain-based platforms, like unstable and slow performance.

When comparing hashgraph technology to other blockchains, there are several significant advantages. Since there is no mining, using the technology has a significantly lower environmental impact. Additionally, transaction costs may be lower. The same security and anonymity advantages of a blockchain-based ledger can be implemented using a hashgraph, along with extra advantages like better performance and increased capacity.

Hedera (HBAR) is the native cryptocurrency of Hedera Hashgraph. The crypto token serves as a utility token and general-purpose currency of the platform. The primary energy source for Hedera services like smart contracts, file storage, and standard transactions is HBAR. Additionally, it strengthens network security because users can stake their tokens to support preserving the platform's reliability.

HBAR coins totaling 50 billion were produced when the Hedera network launched in August 2018. Approximately 45% of the coins were distributed to investors and the team, with the remaining 55% reserved for the Hedera treasury.

In September 2019, Hedera commenced trading. Before the 2021 cryptocurrency boom, it typically fluctuated around $0.03 until its price reached $0.40 in April of that year. Following a decline to $0.17 in July 2021, HBAR increased once more that year, reaching a high of $0.57 in September. Unfortunately, HBAR, like many other coins, could not maintain its high, which has seen its price plummet.

In 2018, computer scientist Leemon Baird and technology executive Mance Harmon founded Hedera Hashgraph. Industry giants like IBM, Google, LG Electronics, Deutsche Telekom, and Tata Communications are among the major corporations that make up the Hedera network's governing council. As of May 2022, the governing council was composed of 26 members. Each term of office for a member may not exceed two consecutive three-year terms. The council is in charge of deciding how the platform's codebase will develop.

Hedera has started development funds using treasury reserves. It launched a $100 million fund in March 2022 for initiatives that emphasize sustainable development. To draw decentralized finance (DeFi) projects, it unveiled a $155 million "crypto-economy" fund in the same month. Additionally, it introduced a $250 million fund in April 2022 to draw metaverse apps.

Hashgraph consensus, which demonstrates asynchronous Byzantine fault tolerance (aBFT) and powers the Hedera proof of stake (PoS) public network, theoretically enables the platform to deliver quick transaction speeds, minimal bandwidth usage, and high levels of security. For example, compared to 2.8 for Bitcoin and 15 for Ethereum, Hedera claims that its Hashgraph network can process more than 10,000 transactions per second.

Who Are the Founders of Hedera Hashgraph?

Dr. Leemon Baird, who currently serves as Hedera's chief scientist, is credited with investing in the hashgraph distributed consensus algorithm. The CEO of Hedera, however, is Mance Harmon, a seasoned businessman and technology executive. In addition to the founders, the Hedera management team includes more than a dozen members, many of whom have had distinguished careers.

The Hedera Hashgraph network is based on a graph theory concept known as directed acyclic graphs. These graphs let users build data structures and flows without looping back to earlier states. Acyclic graphs guarantee that once a transaction is added to the network and made part of the distributed open ledger, it cannot be changed.

In hashgraph consensus, each node is responsible for keeping a copy of the ledger while only keeping the most recent entry. This ledger is kept in the mainnet, a network made up of consensus and mirror nodes. Consensus nodes store the most current state of the network while concurring on the validity and order of transactions. Mirror nodes give programmers flexible and affordable access to historical data storage for analytics and explorers.

The APIs that make up the Hedera network services allow you to do various things, including creating accounts, call smart contracts, mint tokens, and write data to the ledger. Depending on how much processing and storage are needed for each API call, there is a fixed transaction fee. JavaScript, Java, and Go are just a few examples of the languages the Hedera SDKs make easy to use with the API.

What is the live Price of Hedera now?

What is the Hedera ticker?

Where to buy Hedera?

You can buy Hedera on any exchange or via p2p transfer. And the best way to trade Hedera is through a 3commas bot.

Can I make money with Hedera?

You should not expect to get rich with Hedera or any other new technology. It is always important to be on your guard when something sounds too good to be true or goes against basic economic principles.

Can I make money with Hedera?

You should not expect to get rich with Hedera or any other new technology. It is always important to be on your guard when something sounds too good to be true or goes against basic economic principles.

What is the all-time high of Hedera?

What is the market cap of Hedera?

What is the 24-hour trading volume of Hedera?

How many Hedera are there?

What is the relative popularity of Hedera?

Hedera current Market rank is #37. Popularity is currently based on relative market cap.